Publications
"Writing is a process, a journey into memory and the soul."
- Isabel Allende 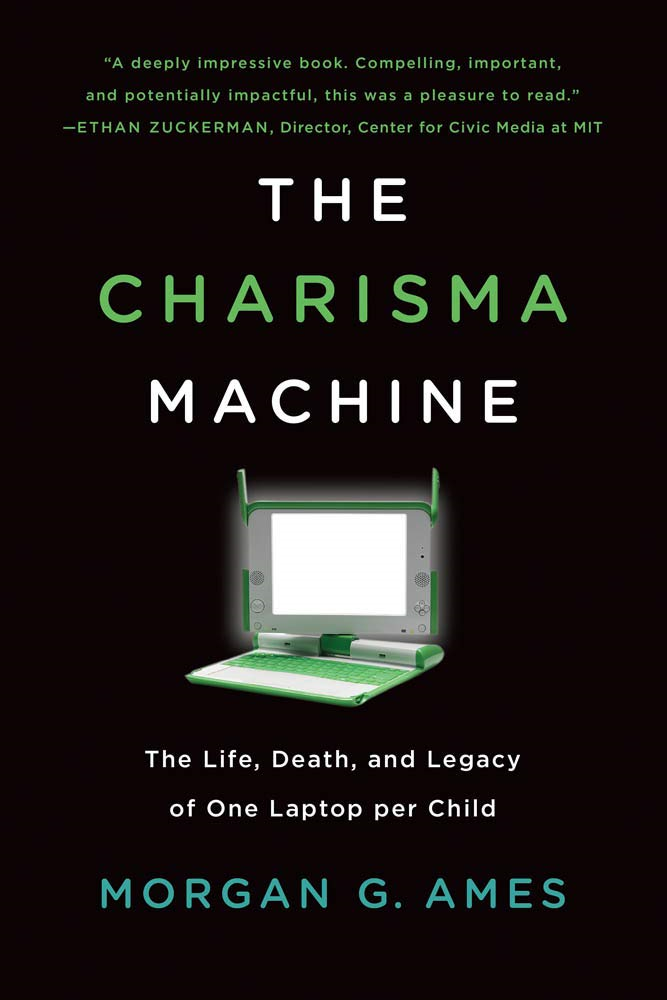 2019. Morgan G. Ames. The Charisma Machine: The Life, Death, and Legacy of One Laptop per Child. MIT Press.

The Charisma Machine chronicles the life and legacy of the One Laptop per Child project and explains why — despite its failures — the same utopian visions that inspired OLPC still motivate other projects trying to use technology to “disrupt” education and development.

Announced in 2005 by MIT Media Lab cofounder Nicholas Negroponte, One Laptop per Child promised to transform the lives of children across the Global South with a small, sturdy, and cheap laptop computer, powered by a hand crank. In reality, the project fell short in many ways, starting with the hand crank, which never materialized. Yet the project remained charismatic to many who were enchanted by its claims of access to educational opportunities previously out of reach. Behind its promises, OLPC, like many technology projects that make similarly grand claims, had a fundamentally flawed vision of who the computer was made for and what role technology should play in learning.

Drawing on a seven-month study of a model OLPC project in Paraguay, this book reveals that the laptops were not only frustrating to use, easy to break, and hard to repair, they were designed for “technically precocious boys” — idealized younger versions of the developers themselves — rather than the diverse range of children who might actually use them. Reaching fifty years into the past and across the globe, The Charisma Machine offers a cautionary tale about the allure of technology hype and the problems that result when utopian dreams drive technology development.

2015. Morgan G. Ames. “Criticism in Engineering Worlds and Beyond: A Case Study of One Laptop per Child.” Workshop Paper, CC 2015, the 5th Decennial Conference on Critical Computing, workshop on criticism for computational alternatives.

2013. Morgan G. Ames. “The Implications of DIY Education: A case study of OLPC in Paraguay.” Workshop Paper, CSCW 2013, ACM Conference on Computer-Supported Cooperative Work and Social Computing, workshop on CSCW in education: viewing education as a site of work practice.

2016. Kelly Burch. “What to do when the grandparents live far away.” Headspace, September 30. Available at headspace.com/blog/2016/09/30/grandparents-live-far-away/ (interviewed)

2016. Morgan G. Ames. “Should Parents Post Photos of Their Children on Social Media? NO: They Violate Privacy, and Without a Child Giving Consent.” The Wall Street Journal, May 23. Available at wsj.com/articles/should-parents-post-photos-of-their-children-on-social-media-1463968922 and wsj.com/video/the-case-against-putting-children-on-social-media/2A6BBC9F-6451-461E-8920-79ADFDECAC6C.html (invited commentary author and guest on WSJ Video)

2015. Susan Pinker. “Can Students Have Too Much Tech?” The New York Times, January 30. Available at nytimes.com/2015/01/30/opinion/can-students-have-too-much-tech.html (research quoted)

2013. Morgan G. Ames. From MIT to Paraguay: A Critical Historical and Ethnographic Analysis of One Laptop Per Child. Dissertation, Department of Communication, Stanford University.